One of my greatest challenges has been to convince clients that they have a slow loading site AND that a slow loading website reduces the number of sales or leads they can expect to get.

I’ve shown them the pretty waterfall charts that show that their site loads in 6.7 seconds – only to have their eyes glaze over.

I touch on it when we’re reviewing their Google Analytics and pointed out that page load times are now part of Google’s search algorythm – and still no response.

Then I discovered a secret weapon….the video of a site loading from webpagetest.org. There is nothing like seeing a blank screen while those seconds tick off to convince clients that site speed is important.

Site speed test from Webpagetest.org. Notice how at 1.4 seconds 0% loaded and at 1.7 seconds 67% is loaded

According to the research firm Aberdeen Group Inc., a 1-second delay in web page load time translates into a 7% loss in conversions. This means that for each 10,000 in monthly sales, you stand to lose $700 or $8,400 per year.

We all want websites with cool features that attract attention and hold interest. But if that technology causes delays or fails to work properly, visitors won’t wait around….they’re off to something else.

As expected, the study found that page-load speeds impacted conversion rates. The conversion rate peaked at about two seconds, dropping by 6.7% for each additional second. 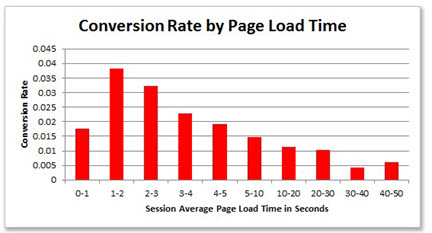 Two studies by Akamai and Gomez are frequently cited in reports on site speed. Both reports are several years old now, but what are the odds that visitor expectations have gone down?

The Akamai Study published in September 2009 interviewed 1048 online shoppers and reported the following:

Remember this was 2009….with all the advances we’ve seen in technology and the emphasis on reducing page load times – do you believe that a site that takes over 2 seconds to load won’t impact visitor behavior?

Two interesting additional points came out of the The Gomez Report published in 2010 which interviewed 1500 consumers about their opinions:

If you’re like most website owners, mobile traffic to your site is rising. It’s common to see 25% or more of your website visitors coming from mobile devices. Are you meeting your customer’s expectations for quick page load times on mobile devices? Probably not.

In a month-long study of 12 e-retail responsive design sites conducted by Keynote, ¹ reported that the average load times by device were:

The companies interviewed spent a lot of time, money, and effort in designing, building and tweaking their sites for mobile visitors.

As Mike Clem, vice-president of e-commerce at Sweetwater commented, templates with a “one-size-fits-all” approach carry a lot of additional, unnecessary code and this slows performance, because all that code has to load before the visitor can see the page on their desktop, tablet, or smartphone.²

What to do next?

Start by getting a clear idea of your site’s page load times. Get a combination of data from Webmaster Tools, Google Analtyics and services like YSlow, WebPageTest, and Pingdom. Look for commonalities to figure out what’s slowing down your site and pick off the biggest offenders first. A good developer can be of tremendous help here.

Next tackle the core of the problem. You’ll never cure poor site speed by tinkering around the edges of your website. For a WordPress site, this would include the following:

Site speed is an ongoing challenge. As you make changes to your site, update plugins and themes and add additional features – be sure to test the impact on your site speed.

This week’s edition includes a Google Analytics 5 tutorial, website optimization tips from a marketing perspective, a reminder on the importance of website speed, how to avoid common small business website mistakes, and why incentivizing signups to increase micro-conversions: